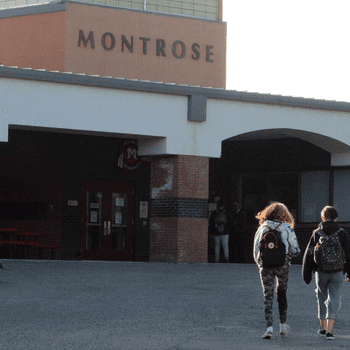 A place to discuss all matters related to Montrose County School District and education in general.

It came down to two: Timberwolves, or Wildcats. Mascots, that is, for Johnson Elementary, which was required under a new state law to switch its mascot for one that did not trade on Native American culture.

Now, the school formerly known as the Thunderbirds is … the Timberwolves!  Writer Cassie Knust  has all the details about the mascot selection here.

What do you think of the selection?

High school in Lamar, Colorado could still face $25,000 fines for its mascot.

In the same Colorado Commission of Indian Affairs meeting where Montrose was told its mascot is approved, Lamar High School was told otherwise. The school's current mascot is "Savages" and Lamar School District wanted to keep that name and change the logo to a bull rather than an American Indian figure. The school district's "Plan B" was to change the mascot to "Savage Thunder."

Neither of these approaches were seen as acceptable by the commission. In the video below, you'll hear commissioners describe why it's not acceptable.

While this decision would seem to require Lamar to pay the $25,000 fine next month, its school board voted at the same time as the commission meeting to drop the name "Savages" immediately. At the end of the meeting, the Lamar Superintendent asked the commission to take another vote considering the decision and the commission told them to work with CCIA staff after the fact.

What do you think about the commissioners comments? Or about Lamar's decision to fight, and then cave at the last second?

Just yesterday, the Colorado Commission of Indian Affairs, which is responsible for enforcing the Prohibit American Indian Mascots bill, voted to remove Montrose High from the list of non-compliant schools.

The action comes after months of back and forth, but the Montrose Red Hawks name is now approved, along with the school's new logo.

Johnson Elementary will also change its "Thunderbird" mascot, but a new name has not been chosen yet.

What do you think about the news? Are you ready to be done talking about mascots?

What do you think about one of the latest school board decisions?

On Tuesday night, the Montrose County School District board voted 6-1 to strengthen the requirement for parental consent for health education: parents will need to sign a form opting their child into health classes, instead of having the option to exempt their child from the class.

While other members voiced some skepticism during a discussion before the vote, Board President Sarah Fishering cast the only dissenting vote.

Fishering argued that requiring parental opt-in would disadvantage the students who are already falling through the cracks and could lead to a spike in teen pregnancies. (The teen birth rate in Montrose County has fallen significantly since peaking in 2007, but is still significantly higher than the state average.)

Other board members, including Jeff Bachman and Jeff Suppes, said that parents should be empowered to make these decisions for their children and choose whether or not they want them exposed to the curriculum in schools.

Meanwhile, sex education — which is only one facet of the health curriculum — has not been a part of MCSD policy since 2018 after the health educator position at the secondary level was vacated and not replaced. But the district is now working on finding a replacement for that job and is going to review the health education curriculum next year through a committee.

What do you think? I think this is super interesting how something that was on the campaign platform of the defeated conservative slate became official board policy six months after the election. There's... (More)